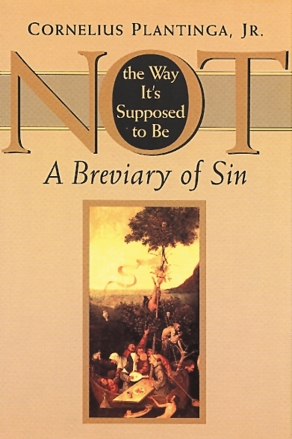 Plantinga Jr., Cornelius. Not the Way It’s Supposed to Be: A Breviary of Sin. Grand Rapids: Wm. B. Eerdmans Publishing Company, 2010.
BUY

One is hard-pressed to find a more polarizing and misunderstood word than “sin.” A slightest insinuation that something is a “sin” provokes angry accusations of intolerant moralism.

This indignance is indicative of the moral subjectivism among today’s regnant intellectuals. What is remarkable, however, is that “people who take a casual attitude toward, say, pornography, tax evasion, or mockery of religion can at the same time show a fierce (even legalist) opposition to sexism, racism, self-righteousness, and air pollution” (103).

But how can an attitude that seems “right” to one person (e.g. a racist or sexist) be called “wrong” by another person in the absence of objective moral standards? Even the most avant garde subjectivists draw the line somewhere.

Defining “sin”
In short, we are profoundly confused about “sin,” and this is what Cornelius Plantinga Jr. sets out to correct with his book Not the Way It’s Supposed to Be. As the subtitle of the book indicates, this is “a breviary,” or a brief summary, of “sin,” but it would be a mistake to think that this relative brevity (202 pages) implies a shallow treatment.

Plantinga begins by defining sin as “any act [or disposition]–any thought, desire, emotion, word, or deed–or its particular absence, that displeases God and deserves blame” (13). Yet divine displeasure is not arbitrary, for God hates sin because it violates shalom, which refers to “universal flourishing, wholeness, and delight,” or simply, “the way things ought to be” (10).

Thus, immorality merely designates a breech of conventional behaviors, attitudes, rights, and obligations concerning other persons. Each ethical and legal system determines for itself who decides right and wrong and what is the law that ought to be obeyed.

Scottish minister Oswald Chambers once said that “the holiest person is … one who is most conscious of what sin is.” In Chapters 2-10, Plantinga canvasses the Biblical and historical Christian witness to describe sin in its various complexions as disorder, contagion, parasite, masquerade, folly, addiction, attack, and flight:

Sin as Disorder (Ch 2)
In the beginning, the universe is a “formless void” (Gen. 1:2), but at creation, God forms and fills. In the first three days, he forms kingdoms, separating light from darkness, sea from sky, and water from land, respectively.

Then, in the latter three days, he fills these kingdoms with kings, creating the sun, moon, and stars, the fish and birds, and the land creatures, respectively. At the end of the six days, as the crown jewel of his creation, God creates man and woman as perfect complements, together to rule over all creation under God’s sovereign lordship.

In light of God’s creative ordering of the universe, sin is an act of uncreation that subverts this divine order and transgresses boundaries. So in the Fall, man infringes upon God’s authority, woman upon man’s, and the serpent upon the woman’s (Gen. 3).

Consequently, the Fall culminates in the Flood, where the creational distinctions are blurred as sky falls upon sea and the waters cover the earth (Gen. 7) (30). If sin is a violation of God’s creational design, holiness, then, “is the wholeness of resources, motive, purpose, and character typical of someone who fits snugly into God’s broad design for shalom” (34).

Sin as Contagion (Ch 3-4)
Leviticus 19 describes both ceremonial uncleanness and moral decay as instances of contamination. Sin is a contagion, a pollutant, that defiles that which is pure. It contaminates a marriage by introducing a third lover. It contaminates worship by introducing an idol (45-46). A “pure” heart, then, is an unadulterated, undivided one (Ps. 24:4).

As a contagion, sin spreads “like the drought that prompts a maple tree to announce its distress by producing hundreds of emergency seed pods, or like a man with AIDS who infects and impregnates a woman, so sin tends both to kill and to reproduce” (54). Parental dysfunction, racism, as well as drug addiction are often passed on from generation to generation.

So, then, sin begets sin. It has a corporate, intergenerational dimension. This fact, however, does not exclude human culpability. The context of sin must not be confused with its cause (64). While “involuntariness may mitigate… it doesn’t necessarily excuse” (22).

An environmental determinism is untenable because it can never conclusively rule out human agency. To not hold people responsible for their sins is to dehumanize them, because those whom we regard as helpless, whether due to immaturity, insanity, addiction, etc., we do not treat as fully human (67).

Sin as Parasite (Ch 5)
Sin also functions more specifically as a parasite, which drains vitality from its host. Like a virus, sin subverts good gifts toward evil ends. So “the same gift that enables a scientist to conquer a disease also enables her to manufacture one and to sell it to terrorists. Using the same thoughtful expressions of praise and caring, a man may inspire a woman he wants to marry or seduce one he wants to conquer” (77).

As C.S. Lewis says, “Goodness is, so to speak, itself; badness is only spoiled goodness” (Mere Christianity, p. 49). Sin is attractive only insofar as it imitates good. “Nothing about sin is its own; all its power, persistence, and plausibility are stolen goods. … Good is original, independent, and constructive; evil is derivative, dependent, and destructive” (89).

For example, anger comes in two forms: 1) “righteous indignation, a virtue of the just” or 2) “smoldering resentment of competitors, the vice of the envious.” Likewise, pride comes in two forms: 1) “proper satisfaction in the achievement of excellence, the virtue of the diligent” or 2) “inordinate self-congratulation, the vice of the pompous” (81).

Some counter that our lives would be drab without sin. Ian Fleming, for one, argues that “the depiction of… sins and their consequences [has] been the yeast in most great fiction and drama” (“Introduction,” The Seven Deadly Sins, p. x), but this is only half true. As Plantinga notes:

Daring thieves, dashing rogues, renegade police detectives, disobedient angels, charming psychopaths–these figures attract us because they are bold, urbane, witty, energetic, or imaginative. … Their sin interests us because it leeches the color, wit, and energy out of normal life and presents these things to us in a novel, risky, and therefore dramatic form (94).

Sin as Masquerade (Ch 6)
Similarly, vice also frequently masquerades as virtue–intemperance as liberty, subversion of relational order as equality, “lust as love, thinly veiled sadism as military discipline, envy as righteous indignation, domestic tyranny as parental concern” (98). Even Satan must masquerade “as an angel of light” (2 Cor. 11:13) for credibility.

“Self-deception, like a skillful computer fraud, doubles back to cover its own trail” (107). As Lewis Smedes observes, “First we deceive ourselves, and then we convince ourselves that we are not deceiving ourselves” (A Pretty Good Person, p. 74). This is the nature of sin.

Sin as Folly (Ch 7)
Sin is not only wrong, it is also foolish, because it is ultimately futile. The Bible often refers to sin as folly, contrasted with the wisdom of staying within God’s order (Prov. 9). Sin involves missing the mark and straying from the path that God intends for us.

It is fascinating, then, that even “people who prefer not to judge or confess sin nonetheless concede that some objectionable act was stupid, tragic, shortsighted, mistaken, unfortunate, miscalculated, erring, regrettable, or out of line” (114) They recognize that something was amiss.

For example, public figures embroiled in a scandal often confess to a “lapse in judgment” or “inappropriate behavior.” As Plantinga observes, this is a cowardly and ridiculous euphemism, but it is nonetheless an important admission. Though they might not concede that they are sinners, they are in effect conceding that they have been fools (114).

Sin as Addiction (Ch 8)
Sin also functions like an addiction on many levels. Its desire is to master us (Gen. 4:7), so it tends to become progressively obsessive (can’t stop thinking about it), impulsive (do it without thinking), and compulsive (can’t help but do it). It refuses to be contained, works itself into the habits of the hearts, and burrows itself under self-deception (147).

Sin as Attack and Flight (Ch 9-10)
Finally, sin takes the form of an attack against God and a flight from God. As Henry Stob argues, hell is depicted in the Scripture as either very hot or very cold. As Jesus taught, it is “the outer darkness” (Mt. 25:30) and “the eternal fire” (Mt. 25:41). That is because:

Hell is made by those who climb the holy mountain and try to unseat the Holy One who, ablaze with glory, dwells in the light unapproachable. Those who mount an attack on God and cross the barrier of this exclusive divinity die like moths in the flame of him who will not and cannot be displaced. And hell is made by those who, turning their backs on God, flee the light and move toward the eternal blackness that marks God’s absence. Hell, then, is unarrested sin’s natural and programmatic end. Sin is either rebellion or flight, and, when persisted in, leads either to the fiery furnace or to the cold and desolate night. (Henry Stob, “Sin, Salvation, Service,” p. 16)

Plantinga’s account of the various ways in which people flee from God is particularly illuminating. We do so by conforming to, conniving with, and condoning evil, and by compartmentalizing our lives and cocooning into our little worlds where we are oblivious to the needs of our neighbors (182-189).

For this reason, perhaps the most dangerous kind of sin is not the grave offense that alarms all, but the seeming trifle that escapes our detection. As C.S. Lewis wisely notes, “Murder is no better than cards if cards can do the trick. Indeed, the safest road to Hell is the gradual one–the gentle slope, soft underfoot, without sudden turnings, without milestones, without signposts” (The Screwtape Letters, p. 56).

To illustrate, the premium value we place on entertainment in the U.S. suggests that “it has become a diversion not only in the sense of a playful relief from the main business of life but also in the sense of a distraction from it, an evasion of it, a sometimes grim, big-business alternative to it” (190).

Human Sin and Divine Grace (Epilogue)
Thankfully, sin is not the end of the story. As Plantinga writes, “Human sin is stubborn, but not as stubborn as the grace of God and not half so persistent, not half so ready to suffer to win its way” (199).

To speak of sin without grace is incomplete, but to speak of grace without sin is imprudent, for to do so is “to trivialize the cross of Jesus Christ…[and] cheapen the grace of God that always comes to us with blood on it” (199).

This is the express purpose of Not the Way It’s Supposed to Be: to remind the church that “to ignore, euphemize, or otherwise mute the lethal reality of sin is to cut the nerve of the gospel. For the sober truth is that without full disclosure on sin, the gospel of grace becomes impertinent, unnecessary, and finally uninteresting” (199).

By leveraging his perceptive insight into culture, Plantinga delivers a compelling exposé of sin. The fluidity of his writing belies the compelling force of his words. His description of the cogency, simplicity, and beauty of divine shalom and the chicanery, vapidity, and depravity of sin inspires deep wonder for God and compassion for the world.

In my estimation, Not the Way It’s Supposed to Be is the most penetrating foray into the doctrine of sin since C.S. Lewis’s Screwtape Letters.

Buy Not the Way It’s Supposed to Be HERE.